The sun shines on B4b

Dublin’s friendliest business network hosted its first in-person event in over 2 years in the Aspen Student Life building Ballymun on Thursday 23rd June. There was a brilliant turn-out at the much anticipated ‘Grill & Chill’ gathering with a who’s who of local community organisations and businesses getting reacquainted or meeting for the first time.  Those who attended were treated to great food and refreshments from Nan’s Food Truck as they basked in the evening sun to the wonderful voice of Hazel Peters.  With the waft of cooked meat in the air, Alex Wilson Manager Aspen Student Life opened proceedings by welcoming everybody to the roof-top garden and spoke fondly of the friendliness and support they have experienced since opening in Ballymun.

The occasion also marked the 5th anniversary since B4b was officially launched and since then B4b has hosted 37 network meetings that have been attended by over 1,000 people.  During that time we have been kindly hosted by Ikea, DCU, Rediscovery Centre, Dublin City Council, Musgrave Market Place, Ballymun Child & Family Resource Centre, Axis, St.Vincent de Paul and Sillogue Nursery.  We were finalists in Bank of Ireland’s Enterprising Towns  & Villages Awards and have been proud to support community and enterprise initiatives such Ballymun CoderDojo, No Bucks Bus, Ballymun Tiday Towns, Ballymun Health & Fitness Festival and StartUp Ballymun. We boast a membership of over 70 businesses and a wider network of 150 contacts.

An so with the pomp and ceremony done and dusted, all that was left was for everybody to enjoy the last of the evening sun and look forward to the next 5 years.

B4b aims to support the Ballymun economy through regular networking events. If you are a local businesses interested in promoting your business and making new connections why not get in touch to find out more: info@b4b.ie

There are no upcoming events at this time. 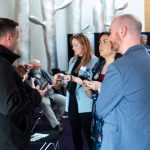